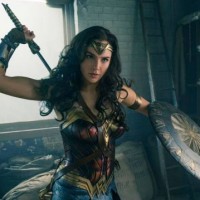 DC finally found its superhero alchemist formula. In this particular case: take the best parts of 2011 Marvel Films’ “Captain America,” but make them five times better. Wrap in a Greek mythological mosaic photographed like a fable and, in the World War I scenes, very old war footage. Add a thrilling, fun, full story–a war film with great characters and dialogue. Don’t try to hide from the racial/sexual dynamics. Mix until it explodes on-screen. Then flip the bird to Marvel Films. 🙂

“Wonder Woman” is the equal of “The Dark Knight,” arguably the greatest Hollywood superhero film ever made. That’s the highest compliment I can give this film. If this fall’s “Justice League” is just three-quarters as good as “Wonder Woman,” DC will have represented itself well.

A classic Western, a Western classic.