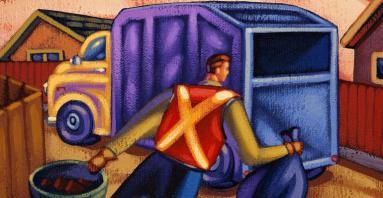 I’m listening to New York Gov. Andrew Cuomo now as I type, telling me how long COVID can stick on surfaces and hang in the air. He’s become my daily obsession. The Mumia Abu-Jamal event I’m waiting for is a little less than four hours ahead.

Still meditating on what happened just a couple of hours ago. I opened the front door, unmasked, waiting for my Whole Foods delivery, and immediately saw a sanitation worker–Friday is Garbage Day in our ward–in distress. Something powderish (?) had spilled on his face while working on our block, and he was less than panicked but more than disturbed.

He asked for warm water and soap and, thanks to me and the homeowner, Annette Alston, we quickly compiled.

Coming back out, I hear a voice to my right yell, “Amazon!” Delivery Dude is peeping the happenin’, so he quickly drops my bags at the foot of the stairs (social distancing, rigghht) and does a great imitation of Ricochet Rabbit. Annette hands me my mask to wear–after all, I’m now in close proximity to two people–and for the first time since the Apocolopyse, I wear it. I’ve been inside the house for weeks, writing my Mumia bio–only leaving the house to take out the garbage–so I hadn’t fully accepted this reality until I finally yielded to Paul Lawrence Dunbar.

Cuomo is talking now about an “economic tsunami” and is daring Senate Majority Leader Mitch McConnell (R-Ky) to allow states to declare bankruptcy legally. “I dare you to do that!”

I really felt for the Sanitation Brother, an Essential Worker. This is not the time to be dealing with unknown substances. What was on his face? Oh, man…..

A neighbor from across the street is checking from her window, asking about his welfare. (Newark is a small town that, paradoxically and correctly, looks like a Big Ghetto from the outside.)

“What did we learn?” Cuomo is asking.

As a “lifelong student of Black media” (a quote from my bio), it’s fascinating how fast we have Zoomed along.  We were well along the road to becoming our own Black public-affairs shows via Facebook Live before the drip-blip, but it’ll be interesting to see how much of Black America will just junk prepared broadcast packages altogether for the live and interactive, the digital harambee. (Meanwhile, The Afro-American newspaper is trying to hold on, having laid off 25 percent of its staff.) I like to approach the study and teaching of media history from many perspectives, and one is from the changing of habits. Are we, slowly and eventually, the “B-SPAN” (Black C-SPAN) I’ve/we’ve been looking for?

Cuomo reads a letter from a Kansas farmer who has sent a mask for a New York health worker. “God Bless America,” Cuomo declared, who is not, he keeps saying, running for president. 🙂

Now he’s talking about taking versus giving. I’m glad Annette and I were able to help the brother. In this time of fear and uncertainty, our community is standing steady. He thanked me as, of course, we are all thanking them.