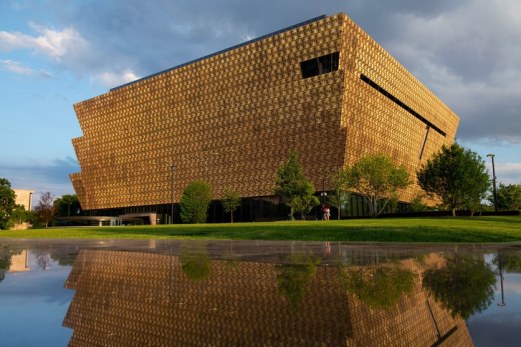 My friend Annette Alston, who signed and sold 40 of her Harriet Tubman books there Sunday, told me Zayid Muhammad–an activist and poet who is a member of the People’s Organization for Progress (as is Annette)–wanted me to write a few words about my impressions of the “Blacksonian.” So, Brother Zayid, this very poor Amiri Baraka imitation/homage is dedicated to you:

This is as much truth as white people can take and give in 2019; of that, there is no doubt. It turned out at least some of them had listened to Baldwin, and perhaps now Coates, and began to at least take the first step toward understanding. Not that I cared about that at first; I had read not one but two highly critical pieces about the NMAAHC in The New Yorker magazine, not exactly a known journalistic forum for Black radicalism. What’s so bad to merit such a harsh Black critique from a white liberal bastion? I came to Dee Cee like a Black Johnny Storm: Hate On!

What I found was eye candy for the Race Man and Woman, a serious feast for all five senses. (The food in the caf… ) The Smithsonian has used all it has learned and has created by all accounts an extraordinarily powerful experience.

So, Sankofa. We go down to the bottom of the historical well in an elevator that makes me, a certifiable geek, think of an African-American TARDIS, and as we move upwards from Africa to Africa-America (hmm!) we are bombarded by photos, documentaries and exhibits. Harriet’s shawl.  A slave cabin. Funder-approved themes such as “The Paradox of Liberty” greet us. (Us was in paradox?) “Life and Work.” (Wait, slavery is equivalent to work?) Ulp, no time to think, because now we’ve been emancipated and still we rise.

The Jim Crow era had all you could expect: the coolest segregated lunch counter you will ever see, with interactive video Tony Stark would love. I was all, blah-blah-blah, yeah-yeah, saw-the-movie….and then I went into a corner with a guard out in front of it, should we forget that what lay in state ahead of us was not for cameras. So I disappeared into the corner, cynical as hell, and then it confronted me.

Emmett Till’s casket. The actual one.

My critic’s haughtiness fell off of me like a jacket quickly yanked off. I stared. One minute. Two. Then I had to walk away. I couldn’t look at it. Like a good American, I immediately tried to bury the memory and move forward.  But the casket followed me for a long time.

Movin’ on up, I was bombarded by Barack Obama’s voice and face on the big screen. (Of course; reminds me when I heard in 2009 that nonfiction book publishers on Black topics made an edict that every Black nonfiction book had to end with Daddy-O painting the White House Black.) Wait, there’s an Oprah Winfrey Theater in here? Not even stoppin’ to check the part about my birth year, 1968, I refused to be present; I didn’t want to be told that I had overcome because Spike Lee and Queen Latifah have had long careers.

The reason that (two Black writers at) The New Yorker was pissed was that it saw what I saw: a muted historical voice. I walked up to the small but nice Black press exhibit, and it said the same thing I have read millions of times. Malcolm X’s exhibit had nothing about his Pan-Africanism–his trip to 13 African nations as an unofficial Black American head-of-state, his attempt at World African Revolution. I looked in vain for any discussion of Black Marxism. Yes, Kwame Ture was there, permanently frozen as Stokely Carmichael before he split (the American from his mind). A friend of mine who walked around told me he didn’t see anything about the Million Man March. The what? Minister who? There is a high level of sophistication in the air: in the 21st century, Oreos are out and smoothies are in, didn’t you know that?

Ironically, museums and exhibits are not in stone. So let’s grat the Newark brother who built it (’cause this ain’t no con!) but follow The New Yorker’s lead and be as critical as possible. The more criticism, the more the Blacksonian will evolve, the more the white psychic rubber band will be forced to stretch.

FEBRUARY 19th, 2020 UPDATE: Okay, imitating me now–I did go back, and I did go to the top floor this time. Good section on Black radio and impressive collection of Black culture treasures (Wow! The Mothership! :)).

2 responses to “For Zayid: Some Brief Impressions From My “Blacksonian” Visit”