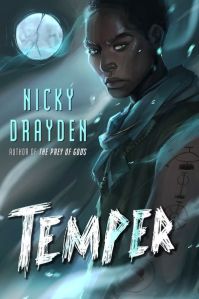 What a “Nicky Drayden sci-fi novel” is is, for now, solidified with this fine second inning. Set in a land that might be South Africa if you want it to be, this tale of twins, dark magic, African god possession and the horrors of boarding school really takes command after a too-long set-up. Secrets pile and spill, characters switch identities and loyalties and–in what is now Drayden’s style–monsters are shown, from the inside out, as all too human. What is important about Drayden as a novelist is two-fold: first, she seeks to destroy public (gender) identity’s use as a lazy marker of someone’s totality, and second, in this novel particularly, she shows that true balance is achieved by serving every side of imbalance. Definitions built, then crushed. Religion and science at odds, or working in harmony? Waaayy too simple. And Drayden delights in her humorous genre- and character-mashups.  Like her first novel, “The Prey of Gods,” this is not your father’s fantasy Africa or Africans, and nor is it meant to be; it is another fully realized narrative from an author who refuses to see and satisfy any pre-supposed expectations or limitations.