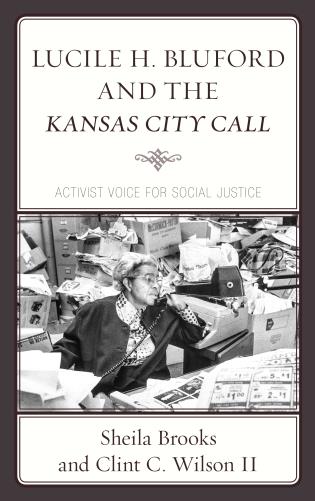 The story of how Lucile Bluford helped lead Black Kansas City from the late 1960s through the 1980s via her newspaper, The Kansas City Call, is not unusual, as 20th century Black press stories go. And that very normality is what makes this monograph important. When not roadblocked by Black male sexism (and even when they are), Black women seek, and fight, to save, heal and transform the entire Black community–to save it from itself, even if that work results in personal attack and vicious slander. These women, like Bluford, are strategic. And Brooks and Wilson explain that tactical nature, along with that unswerving commitment, in qualitative and quantitative form, showcasing well her roles as local activist, cheerleader and critic. In the Twitter Age, one in which Black feminist perspectives often lead national Black (digital) activist discourse, Bluford’s brand would today hold up as well as her electric typewriter on the book’s cover: she often used a male pseudonym when it was time to talk tough. But that is not the point here, although that historic action of Black press female reporters and editors should be the focus of future 19th and 20th century Black newspaper studies. Happily, there is no attack and slander in Bluford’s story, because she earned the respect of Kansas City as its Black informational leader and independent advocate. Future monographs about 20th century Black press publishers, reporters and editors should explain in further detail the ideological/personal relationships between Black newspaper staffs and Black activists, especially the idea that the Black women who have always driven local Black activism were major portions of these papers’ audiences. But for now, with more books published on Black women journalists in recent years than ever before, academia is now seeing a significant growth in the topic of Black press herstory.