A true public intellectual. Little known was the he was the graphic artist for Gil Noble’s “Like It Is,” and perhaps even less known was that he was the show’s unofficial international advisor.

He was sick for a long time.

A disciple of Carlos Cooks, another almost-forgotten Pan-African activist. (I’m glad Herb is still here to remember all these people.)

The above panel participation is from 1995, during the height of the “Free Mumia” campaign and the vigorous open discussion of slavery in Sudan. 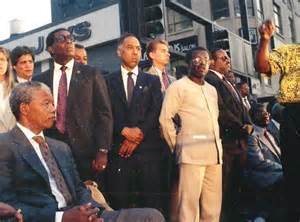 Elombe Brath, long-time Black Nationalist organizer and activist, has made his transition after a long career in the Black Freedom Movement.

Elombe, 77, made his passage on May 19th, a day not without irony, for this was the birthday of one of the men he most highly regarded: Malcolm X.

When he was 20, he and his brother, Kwame Brathwaite, founded the African Jazz Arts Society in Harlem, where they featured young artists from the community. They were jazz lovers and fans of such icons as Charlie Parker, Miles Davis, Max Roach and Abbey Lincoln.

In 1975, he launched the Patrice Lumumba Coalition (the first independent President of the Congo), from which he worked against the racist apartheid government in South Africa. Fifteen years later, he would be a top organizer for Nelson Mandela, when he came to New York, in 1990.

Elombe Brath would work for the freedom of the Central Park 5, the five youngsters condemned in the media, imprisoned and convicted of a gruesome rape that none of them had committed.

Brath, although born in Brooklyn on September 30th, 1936, was a life-long son of Harlem – and there he lived and worked, with the ideas of his nationalist heroes, Marcus Garvey, Carlos Cooks and Malcolm X.

Brath, after a long struggle and illness, returns to his ancestors.