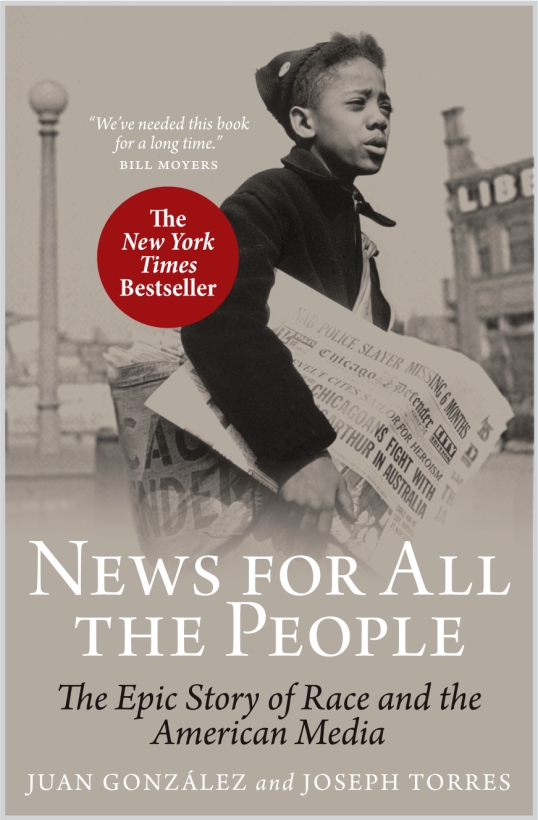 News For All The People: The Epic Story Of Race And The American Media.
Juan Gonzalez and Joseph Torres.
Verso.
480 pp. $29.95.

When journalists write history, there is always the danger of that history being shallow, surface-level. This remarkable book is one of the rare instances of such a problem being a positive, due to its great, realized ambition. For this narrative successfully weaves the history of Black media, Native American media, Hispanic media and Asian media within the context of the history of America’s capitalistic media development.

Building on the work of media historians and colonial and American newspapers from three centuries, the authors outline a people’s history of American media, with the people publishers and broadcasters of color, and how this history ebbs and flows with the creation of  The One Percent and its information expansion throughout the country, respectively. It matches the growth of the media with the constant surging of America’s white supremacy, each reflecting the other. It finds “rebel editors” of all colors and their publications who resisted the racist tides, often at great personal risk. And it connects these historical figures with the up-to-date issues and modern resistance that the media reform movement is currently waging to save the World Wide Web from being consumed by corporations. “With each day that passes, with each new advance in mass communications technology,” Gonzalez and Torres posit, “our biggest media companies feverishly race to readjust, to become bigger and more dominant in the marketplace. Only by clearly grasping the main conflicts and choices that shape our current media system can ordinary citizens successfully unite with the concerned journalists and workers within the system to bring about meaningful reform. The second democratic revolution of the U.S. media has already begun.”

Ultimately, the authors believe that explaining the history of this sometimes radical, sometimes capitalistic reform will inspire 21st century media practitioners—meaning, all of us—to (continue to) organize with keyboards and cellphones.  As 2011 ends, Gonzalez and Torres provide not just a clear understanding of how the enemy built the empire, but merge historical ideas on how to use the new/old tools at our disposal to resist it.